We’ve had the likes of the brilliant Headmaster, which was one of the early successes of VR, but it was only a matter of time before a proper football game was released in VR. While it strips back some of the rules of the sport, with VRFC we have that very game, and it’s a brave attempt at getting football to work successfully inside a VR headset, even though things rarely feel as smooth as you might like them to.

The game has a deep tutorial mode, which takes you through how exactly the game is played, and it’s a good thing as such a mode is of great value when it can take awhile to pick things up, and that’s definitely very much the case here. You really will find that there’s a lot of information for your brain to process when playing the tutorial and you may find that you might have to play it through multiple times, but at least you aren’t left wondering what you should be doing.

Before going deeper into the game’s actual mechanics, let’s talk about what is missing. Firstly, the obvious thing is that the game is a four-on-four multiplayer game, which means that player numbers have been reduced significantly compared to a real field of two football teams, and with the AI keepers also included, this is actually five a side football. Other differences include the lack of the ball going out of play, which means that there are no throw-ins, goal kicks or corners, and it’s not possible to foul opponents either, which all means that while VRFC is a football game, it’s one that can hardly be called a true representation of the sport. 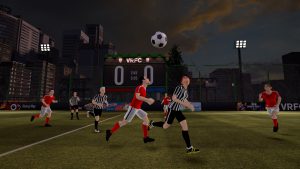 Visually, the game is basic but functional enough.

To play the game you need a pair of Move controllers, which you move up and down in a motion that mirrors running. Taking control of a single player, the game is played from a first person viewpoint, and the motion of running has been captured well from inside the PSVR headset. Each individual Move controller is used as a single foot inside the game, allowing you to do typical football actions such as shooting and passing, both of which work through modifier buttons.

VRFC is very difficult to grasp though, and you really would have to have the patience of a saint to even approach anything close to decent. I found it wasn’t only me, as whenever I played with and against others online I often noticed them running around rather aimlessly in a bid to get the ball in the back of the net, and things like the turning just don’t come across as very natural. It really does feel awkward to play at times, and it’s during these times VRFC just feels like a tiring slog as opposed to anything else. All this, and the game has already been simplified somewhat through a patch as well, which does make things feel slightly better than initially, but it’s still a long way from being a truly convincing version of VR football.

When VRFC feels like it is working though, there’s satisfaction to be found in a well placed pass or shot at goal. The game just isn’t intuitive enough to make players stick around, which is evident by the lack of people playing online right now. This is a big red flag considering that the game hasn’t been out for very long at all, and doesn’t bode well for its future. It’s an even bigger red flag when you realise that the game has cross-play with the Oculus Rift and Vive versions.

AI opponents have been added through a patch, and at least this means that there’s always the opportunity to play a match now. Any slots that aren’t filled by other players are now filled by AI opponents, and this at least adds some value to the game, as it’s not very satisfactory to purchase a game and then realise that you are unable to play it. Still, there definitely needs to be an option in which each team is in their own individual colour.

Like I mentioned in the opening paragraph of this review, as the first football game to attempt to capture the sport in VR, VRFC is an admirable attempt, but I really didn’t find it successful enough to keep me coming back for more. There’s fun moments to be found and all credit must go to Cherry Pop Games for continuing to support the game, but ultimately it just feels overly clunky to play, and is perhaps a reminder as to why the developer of Headmaster limited their game to headers.

When Bugsnax was first announced, it was a game that was somewhat difficult to get ...